Ever wanted to visit a lush jungle? Or mystic caves? Maybe a desert? Or even the North Pole? Let us invite you to all of these places in the brilliant mobile platformer Kiba & Kumba Jungle Chaos.

What makes a great mobile platformer for Android and iOS?

When it comes to jump and run games you need a few things: great levels, catchy music and a character that, well, jumps and runs. Good thing that we have all of that combined in this wonderful platformer game starring the adventurous apes known from KibaGames, Kiba and Kumba.

Which means that we do not only have one character, but two adorable apes to choose from. Both have the same abilities, so it's a pure matter of taste which one you choose.

Kiba Kumba Jungle Chaos, despite the name, does not only take you on a journey through the wild jungle, but also to Egypt, a scary cave and the North Pole. In each of these worlds it is your main goal to reach the end of every level.

However you can end each level with a rating from one to three stars. How many stars you will earn is determined by three different factors:

But of course it wouldn't be a real mobile platformer, if there weren't a considerable amount of obstacles to overcome in order to reach the end. 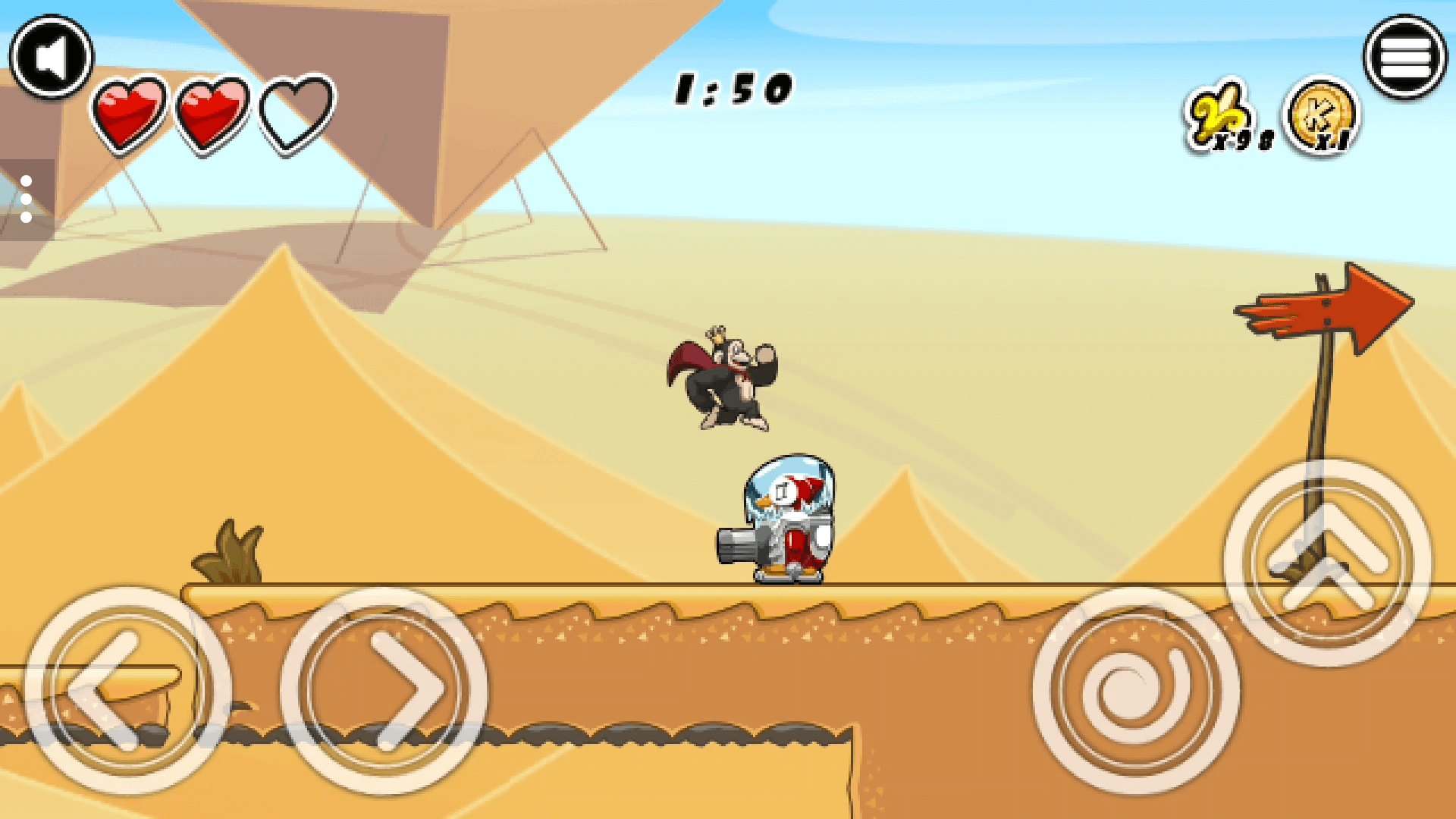 We have never met a real Penguin in person, but we surely hope they are nicer than the ones in our Kiba and Kumba platformer. There are regular penguins, robot penguins, even flying helicopter penguins. And all of them want to stop you on your way to the level's finish line.

And be aware, that there are penguins in different colors. The blue ones are only moving from left to right or flying up and down. But the red ones, these are a little more dangerous. Because they will shoot at you. Of course it's only tightly pressed snowballs, since they are from Antarctica and don't know anything other than snow and ice. But if you have ever been part of a snowball fight you know that even snow can hurt.

Thankfully like most evil guys they have one significant weakness: jumping on their heads! If Kiba or Kumba jump down on any of these penguin villains, they immediately explode. In a nice non-violent way, of course. If it's good enough for a certain Italian plumber it can't be wrong for our friendly apes, right?

Anyways, making your way across each level will demand a lot of jumping (on penguin heads) and running while avoiding not only getting caught by penguins, but also not ending up in very spikey pits or falling down an endless abyss. As a famous "Apeventurer" you certainly do not have the easiest life in the world.

How do the controls work?

It's really easy. And it doesn't matter if you're playing on your smartphone or on your PC. Just like in almost every good mobile platformer you run from left to right. Controlling either Kiba or Kumba is really simple:

Running On your PC you simply use the arrow keys on the keyboard. If you choose to play on a an iOS or Android smartphone or tablet, the layout of the controls is very similar to a classic game controller. You can run right and left with the arrow buttons displayed on the left side.

Jumping The other important ability in every platforming game. On your keyboard use the up arrow. On your smartphone or tablet there is a button for jumping on the right.

While in the air you are able to control your character and change directions. This can be very helpful, for example when you jumped too far.

Are you able to reach all three stars in every level in all of the four different worlds?

A little different approach to a mobile platforming game is the wonderful One Button Game Kiba & Kumba Shadow Run.